from a book written of mrs. rampa - the lady that the former  lama had to share his life with. She apparently wrote some  - 4 - books on their daily life - this is from the book   HERE book TIGERLILY written by "mrs.rampa" 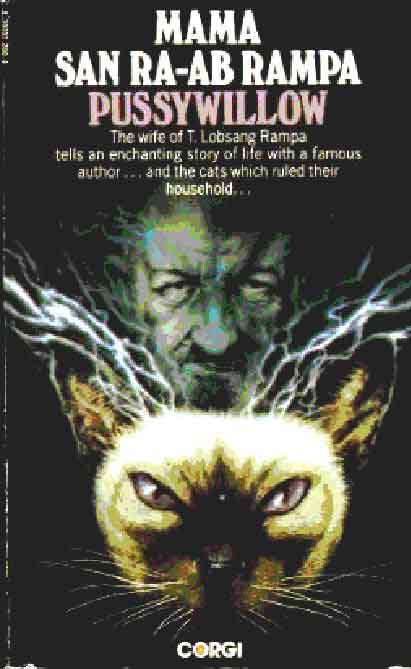 .....I will stay with ghosts . . . which seem to be more my forte.
Some years ago I had a very interesting experience while living in the suburbs of London. I was standing on the plat-
form at South Kensington waiting for the train which would soon be arriving, and which would take me the journey of
twenty minutes or so to my home in Surrey. Just idly watching the other passengers and wondering who they were and
where they might be going, what kind of jobs they might have, etcetera, I saw an acquaintance, standing nearby, with
whom I had recently been chatting in an office.

I was a little surprised to see her going home so early as she had not appeared ready to leave when I had left. As the approaching
train pulled up, stopping before us, we entered at the same time, and sat down together — immediately becoming en-
gaged in conversation. The young lady seemed to be rather quiet; but she looked more full of color, more radiant, than
she had seemed on other occasions. She was carrying a purse (or handbag) and a larger bag containing her office needs and
the like, and these items attracted my attention — my
eyesbeing riveted on their brightness.

The colors of the large
bag, especially, were quite vivid and seemed to be sur-
rounded by a ‘special’ glow. The meaning I am trying
toconvey is one of extreme brightness, not actually more
colorful but really GLOWING. We were not sufficiently
closely acquainted to be talking about anything very serious
or intimate, merely carrying on a light conversation — prob-
ably both wishing the journey was over so that we could
quickly reach our respective homes. I had a beautiful silver
tabby cat waiting for me, and I knew he would be anxiously
awaiting my arrival; and he would be ready for supper so,
after alighting from the train we sauntered out of the station
and onto the street.

I believe I asked her whether she was
going my way; but apparently she wasn't — and she
simplydrifted away. Later that evening I mentioned the event
to the third person who had been in the office that afternoon
and how I had traveled with Miss Secretary. You can pic-
ture my surprise when I was told, ‘You could not
possiblyhave traveled with her for she was still in the office
talking to me:


What was it? An unsolved mystery? Not at all! Miss Sec-
retary was merely thinking very strongly about her own
affairs, and wanting to leave early, and she had used so
much thought power in the effort that she had made a
‘form’and actually traveled out to the suburbs in such solid
formthat she could be seen. This is not a rare occurrence for I
have read and heard of many similar instances; so I do not
find it strange — but just something of extreme interest.
Thesame very bright light was visible when my Silver Tabby
was preparing to make his final farewell and getting ready
to return to his heavenly home, and caused (I believe) by
unseen entities who came to assist in his passing.

Another time I was sitting in a bus in the Maida Vale
district of London. It was raining quite heavily and the bus
stopped to allow passengers to enter or leave the vehicle. I
was indulging in a bit of daydreaming, as usual, when sud-
denly I came back into focus at the sight of a young, at-
tractive woman just entering the vehicle. She was fair-haired
and wore an attractive headdress, and a coat light in color.

It seemed most strange that, although there was a real down-
pour at that time, this young person was completely dry —
asdry as if she had stepped right out of a beauty parlor; and
this surprised me! also the fact that she seemed to be en-
veloped in a ‘brightness’, which was missing as far as
theother passengers were concerned.

SO FROM CHAPTER TWENTY-FOUR:

".....There has been a lot of time for thinking since we came to Calgary, and the past few months has been a period of ‘re- viewing’, of looking back to some extent to compare Yester- day with Today, considering how one might improve one's self in preparation for the tomorrows which all too soon will be Todays. As one grows older one realizes the futility of such states as worry, fear, anger and the like; and the Guv (nickname of LOBSANG) has an ex- pression for those who periodically give way to these emotions. He says, ‘Why worry, it won't matter in fifty years time.’ Quite a consoling thought. And there is an old saying which has much the same meaning:

‘If there's a cure, try and find it If there isn't, never mind it.’

I have learnt a great deal through my association with Lobsang Rampa, probably more than I will ever realize while I am on the earth. I would have to be pretty dim not to have benefited from the two decades of our association. I suppose the outstanding things which are likely to stay in my consciousness are:

sel, not discussing other people's affairs to their detriment. Not to talk too much and not to tell everything you know. I have tried to follow this advice and sometimes it has been a great strain to refrain from saying, ‘Oh I know about that; I will tell you.’ But then I kept my counsel and I really find it interesting — to observe but to say nothing can be fun. People don't know how much you know and so they will tell you even more. The Guv says that if you tell all you know, the other person will think you know even more, and then you have to work harder not to disappoint him. I am reminded of one case in particular where a man talked too much of other people's affairs. He had recently become the manager of a bank and apparently he dis- cussed the accounts of one person with another. When it became known what was happening (after someone com- plained), well, the poor man was demoted. No, this did not happen in Canada.

own business, the giving of one's time, one's under- standing, one's forgiveness, can bring joy to the recipient and contentment to the giver. Even one's material goods. If we have two of something, why not give one to some- one who is without — if he can use it? Many people have commented upon the Guv's extreme kindness in this re- spect and I will go so far as to say that, if he had only one of something and another person needed it he would pass it on to the other person. Unlike many of us, he does not give away only the things for which he has no use. He gives that which he treasures if he sees someone wants it. It is his belief, and mine too, that if a person desires one of your possessions, that person puts his ‘impression’ on it, so in a way you have lost it; and the only thing to do is to hand it over; otherwise, every time you look upon it you will sense (unless you ‘see’ as the Guv does) the would be owner's ‘impression’ and you will no longer enjoy that particular possession. So why have two dis- satisfied persons? Better to give it away.

(3) TO DISCIPLINE ONE'S SELF. . . The difference be- tween rabble and a well controlled army is just a matter of discipline. Anyone possessed of average intelligence knows that training and reliability make a better person. Training consists merely of repetition, habit, or whatever we like to call it; and the first thing is to make a decision and stick to it. I have not met anyone who had so dis- ciplined himself as Lobsang Rampa. He will never allow his physical to overcome his mental state; and the more desperately sick he may feel he will get up from his bed to prove to himself that his ‘will’ is the master of his body. When I started to write these pages I felt the need to do something different and to work on it regularly, and I have found the discipline involved very beneficial. When I told Mr. Sowter I found writing very good therapy, he expressed surprise. He must have thought I was badly in need of therapy to adopt such stern measures.

(4) T0 STAND ALONE. . . This, to many people, is probably the most difficult of all for, though we may have an independent nature, we do not like the idea of standing alone. The Guv has repeated over and over again that ‘everyone must learn to stand on their own feet for it is the only way to progress’. In the final analysis, NO ONE can escape; each one of us must account for himself. When on occasion I may have bemoaned the fact that life can be very lonely, I am told: ‘You don't know what loneliness is until you go away from your own people and your own land, with no hope of returning: How would you like to be mis-understood and maligned when all you were trying to do was to help poor struggling humanity?’ I have thought about it and decided that I could not bear that kind of loneliness. In my saner moments I re- alize that, after all, compared to the Guv my conception of aloneness is nonexistent.

HERE book TIGERLILY written by "mrs.rampa" - here she writes about her former life - before her real husband left his body - and Lobsang got the task to use the same body in his mission in the spiritual ignorant westworld. This file is EXTRACTS from her book. All her books are much about CATS - ALSO THIS ONE

here you can download in ZIP the WHOLE book TIGERLILY written by "mrs.rampa" - here she writes about her former life - before her real husband left his body - and Lobsang got the task to use the same body in his mission in the spiritual ignorant westworld. This file is packed on winzip (142kb) and you must unzip it after downloading - its a wordfile.


if you want to read more of the books written of mrs.rampa - you can write a mail to the address below - and ask if he will send you one or more books over e-mail.
contact here then.

But it is to remark that her book does not much deal with supernatural themes like LOBSANG does - and as here touched- so the extract here is not adequate for the content - it is most about their cats and the daily life in different cities. They seemed to move much around in Canada always hunted by pressreporters and curious people, but also meeting kindly and helpful people.