the connection between the Overself and the sub - cons.

(from the book CANDLELIGHT from –73)

(some words translated to scandinavian)

".....Now, I am also told, 'You've got me all confused; you say the Overself is going to vary the current - well, what is the connection between the Overself and the sub - conscious?' 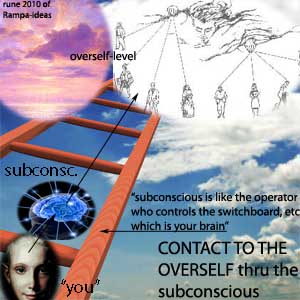 "Let us try to get this clear for ever and a day or a bit longer; there is you who is just one - tenth conscious. You are bottom man on the ladder, or you might even be bottom woman on the ladder. Above you - you have your subconscious, and your sub­conscious is like the operator who controls the switchboard, etc., which is your brain. The subconscious is in touch with you through your brain - through your joint brain would perhaps ­be a better term - and the sub - conscious is also in touch with your Overself. So it's like you, the ordinary poor worker, who cannot get a word with the manager, you have to go through the shop steward or the foreman first. So you sort of hang around, try to make yourself obtrusive (iøynefallende) in the hope that the shop steward or the one above you will notice you, and wondering why the (you - know - what!) you are not at work will come and see what it's all about. Then you have to get your point of view over to the shop steward (tillitsmann) or foreman, and persuade him to take up your case with the manager or whoever is above him. This is similar to conditions with the Overself and you. Before you can get through to your Overself -you have to enlist the aid of your sub - conscious, and once you can convince your sub - conscious that it's really necessary for your joint good (fellesgode), then the sub - conscious will contact the Overself and the pendulum will be varied according to the indications which you are 'perceiving'.

Incidentally, if you can get through to your Overself by way of the sub - conscious you can cure a lot of illnesses which you may have. The Overself is like the president of a company and he doesn't always know what minor ailments affect the lower departments. He knows it in times when conditions are very, very serious, but often he is in complete ignorance of some grievance, which the lower order of workers have. But if you can get your shop steward to take up the matter with the Over - self, or president, or general manager, then a grievance can be settled before it becomes serious. So if you have a persistent ache here, there, or somewhere else, then keep on at George Qr Georgina, say clearly what the trouble is, what is this pain, what does it feel like, why do you have it, and will the sub­conscious please see that you are cured. The Overself is the unapproachable. The sub - conscious is the link between you, the one-tenth conscious, and the Overself which is all conscious.

more from that book | main on Rampa